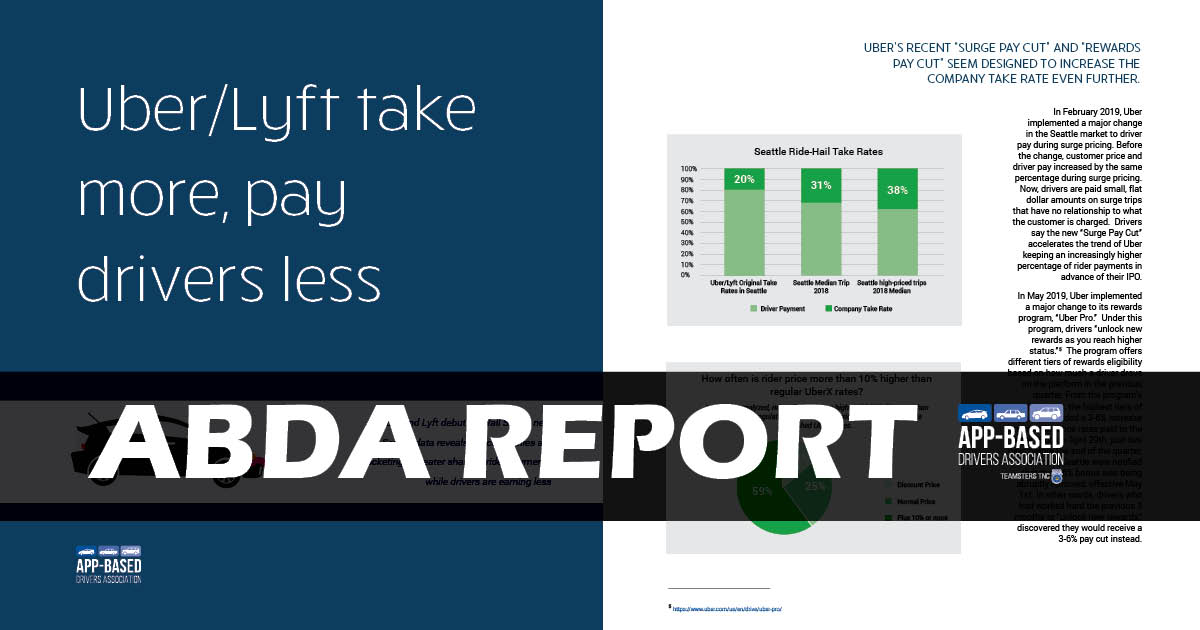 Ride-hail companies Uber and Lyft are pocketing an increasing share from what passengers pay while drivers are earning less, according to a new report released today by the App-Based Drivers Association.

The study – based on analysis of company financial reports, combined with never before released trip-level data collected by local drivers in Seattle – was released at a Driver Speak Out event attended by drivers at the Sea-Tac Airport waiting lot.

“As drivers, we make sure our customers get to their destination safely, and we bear all the costs of car, gas, maintenance, repairs – everything,” said Don Creery, who has been driving for Uber for 5 years.  “But over the years Uber has been taking more and more from what passengers pay, and now they’re telling investors they plan to reduce driver pay even further to satisfy shareholders.  It’s just not right.”

The Speak Out event was one of more than a dozen driver-led actions in major metropolitan areas, happening just ahead of Uber’s highly anticipated debut on Wall Street, which is expected to draw a valuation that could top $100 billion. But, while Uber’s IPO may be poised to mint a new generation of overnight tech millionaires, the data shows that drivers are being paid a declining share of what customers are charged.

On a majority of trips analyzed, riders paid higher prices than advertised non-surge UberX rates.  On these high-priced trips, drivers received just 62 percent of rider price – the company take was 38 percent.  On some trips, driver pay fell to as little as 32 percent of what customers were charged.

Uber and Lyft’s take rates are high relative to other online marketplace platforms.

Paypal charges users 2.9%, plus $0.30. Etsy charges merchants 5% plus a listing fee.  Mercari charges sellers 10%. Ebay fees are between 2%-12% of sale price. AirBnB fees for hosts and guests combined range between 3%-23% of listing price.

“Consumers deserve price transparency to know that at least 80 percent of what they pay is shared with their driver, not kept by the company for overhead or profits,” said Peter Kuel of the App-Based Drivers Association, who has been an Uber and Lyft driver for 5 years. “Uber and Lyft should meet the same standards of every other business in town, ensuring that drivers can earn paid sick days and never receive less than a $15 minimum wage after expenses.”