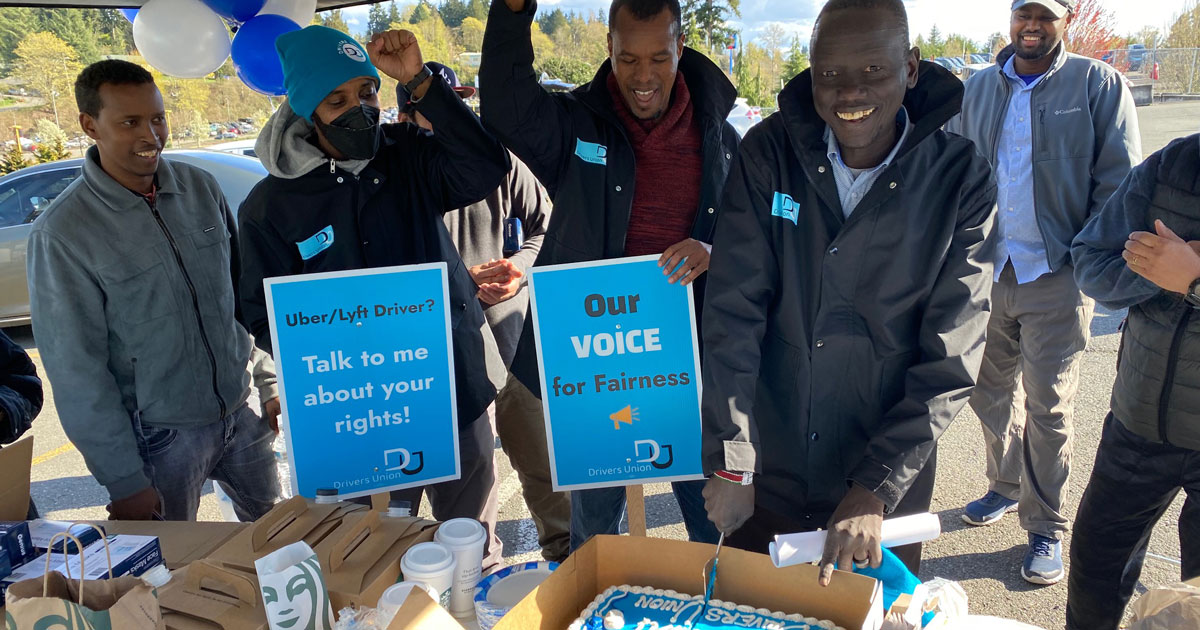 Today, Uber and Lyft drivers in Washington state celebrated nation-leading pay and benefit guarantees with the signing of HB 2076 - the “Expand Fairness Act.” The legislation is the culmination of over ten years of driver organizing, building on groundbreaking protections won in the City of Seattle.

Drivers across Washington praised this unprecedented victory in providing sustainable livelihoods and guaranteeing crucial protections and benefits. The Expand Fairness Act secures the highest labor standards for Lyft and Uber drivers in the country, including a statewide minimum wage for drivers, paid sick leave, workers’ compensation benefits, and protection against unfair termination.

“Over the years, drivers have seen pay cut after pay cut from Uber and Lyft,” said Tacoma driver Francis Kamau, who has driven the companies for seven years. “It’s gotten to the point where Tacoma pay is so low that even after giving back-to-back rides during peak hours, we’re making less than minimum wage after expenses. Winning a statewide pay raise with cost of living increases is important for drivers to pay the bills and put food on the table for our families.”

Bob Gulbranson, an 84-year-old Edmonds resident who has driven for Uber to supplement his social security income, echoed that sentiment, celebrating the victory for worker protections. "I was deactivated and lost my job after I was hit by an uninsured motorist,” he said. “By organizing together in our Union, drivers are winning an end to unfair deactivation without good cause. It's a good day for fairness."

“I’m proud to have introduced and passed through the legislature first-in-the-nation legislation advancing the rights of Uber and Lyft drivers in Washington,” said State Representative Liz Berry.  “The drivers have been my North Star throughout this process. They have been asking for statewide pay raises, deactivation protections, and benefits – a better quality of life and future. This agreement prioritizes those who matter most: the drivers and their families.”

Peter Kuel, President of Drivers Union and an Uber and Lyft driver since 2014 said that “after years of organizing along with drivers in Washington – mostly immigrants like me – we’ve finally won our most significant victory yet, the highest labor standards in the nation. The signing of the Expand Fairness Act demonstrates the tremendous impact we can create when we combine our voices and demand better.”

Washington’s more than 30,000 Uber and Lyft drivers are made up largely of immigrants and people of color.  In fact, 30% of drivers and their families rely on food stamps in King County and 24% of drivers in the county are living in federal poverty (Parrott & Reich 24).