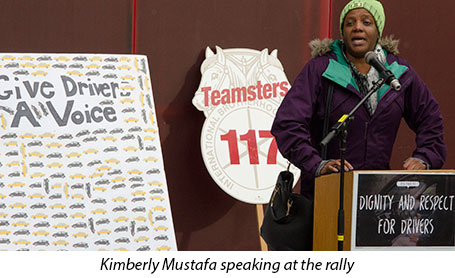 Drivers in Seattle's for-hire industry joined with dozens of community supporters on Wednesday to call on the City Council to pass Mike O'Brien's a Voice for Drivers legislation.

The proposal, which unanimously cleared the City's Culture and Finance Committee on October 2, would give drivers the right to collectively bargain over their pay and working conditions.

Supporters of the proposal gathered outside City Hall and held signs that read, "Drivers Need a Voice," "Equality in the Gig Economy" and "Riders for Drivers."

"This bill means a lot to us drivers," said Fasil Teka, an Uber driver and member of the App-Based Drivers Association's leadership council.

Taxicab operators also expressed their support of the proposal at the event.

"As a cab driver, making a living has become really hard," said Aamar Kahn, a wheelchair taxi driver and member of the leadership council of the Western Washington Taxicab Operators Association. "All we are asking for is a level playing field and that can't happen until drivers have a right to speak up. We want every member of our City Council to support that."

One driver, Kimberly Mustafa, said she had been recently deactivated by Lyft after helping to organize the day's event.

"Last week they sent me an email saying that I was a platinum driver," she said. "Monday I attended a meeting at the Teamsters, and Tuesday I got an email saying I was deactivated."

Indiscriminate deactivation, a flawed rating system, and low pay are a few of the issues that drivers for on demand transportation companies like Uber and Lyft have raised.

After the rally, a delegation of drivers delivered a petition to the Mayor's office with the signatures of hundreds of drivers and community supporters calling on the City to pass the proposal.