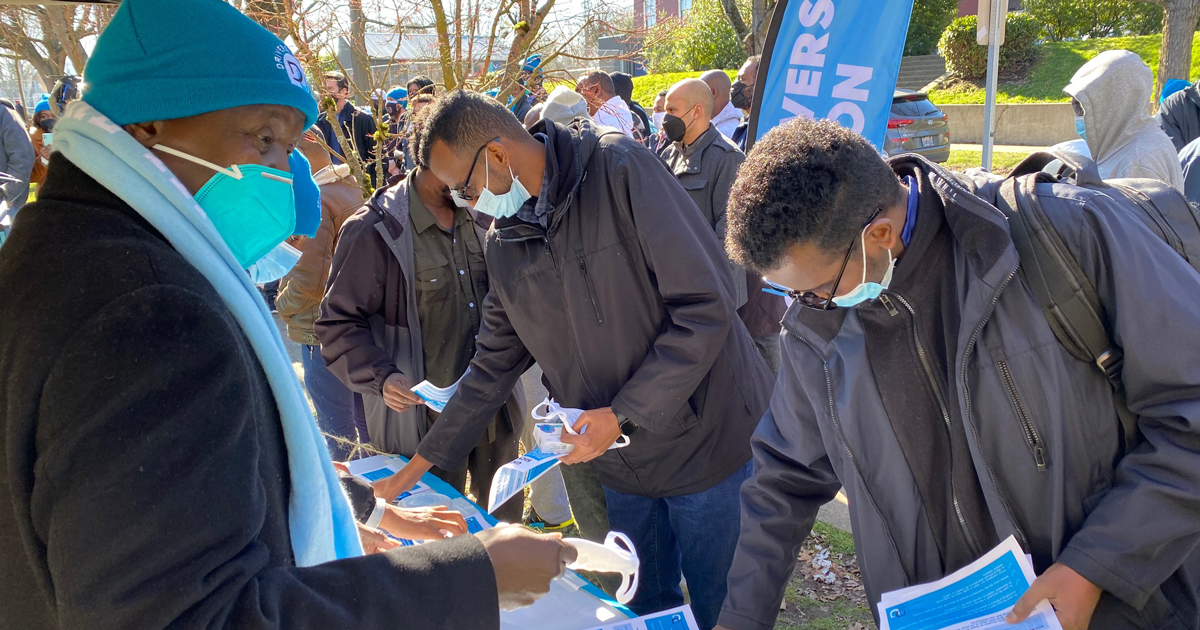 Organizing together through Drivers Union, drivers are now fighting to pass the “Expand Fairness Bill (HB 2076)” - to expand pay raises, benefits, and labor protections at the state level.

But now, when drivers are poised to win a major statewide expansion of our rights, we are being attacked by a small but vocal group of out-of-state critics who aren’t familiar with Washington state law or our driver demands locally.

Here are the top 6 myths from out-of-state critics on The Expand Fairness Bill.

Before Uber and Lyft came into the market, drivers in the for-hire industry have always been paid when we have a passenger in the vehicle.

However, pay used to be high enough to account for the fact that drivers have working time and expenses in between trips.  Then, Uber and Lyft implemented pay cut after pay cut, taking more for themselves.

Drivers in Seattle fought back and we won the nation’s highest minimum wage standard in Seattle that increases pay while we have a passenger to account for our working time and expenses in between trips. The Expand Fairness Bill builds on our nation leading minimum wage in Seattle by passing the highest statewide minimum pay floor in the country.

Paid sick leave is accrued at the same rate as all workers with a pay standard that builds on Seattle's highest-in-nation minimum wage – escalating pay with a passenger to account for working time and expenses between trips.

After 40 days worked, a driver will have earned 1 paid sick day, paid at a rate to account for all their work - just like any other worker under state law.

Uber and Lyft drivers in Seattle, by organizing with Drivers Union, are the only drivers in the country who have won paid sick days, and The Expand Fairness Bill will expand that right statewide.

Thousands of Uber and Lyft drivers in Washington state are already receiving full unemployment benefits (not just PUA).  The Expand Fairness Bill establishes a task force to ensure that Uber and Lyft are paying their fair share into our state’s robust unemployment and paid family medical leave systems and to make improvements to support drivers.

The Expand Fairness Bill would immediately raise driver pay in every local market around the state, including:

Since that time, Drivers Union has won the highest labor standards in the nation legislatively.

The Expand Fairness Bill builds on these victories statewide – winning pay raises, benefits and protections that make concrete improvements in workers’ lives while advocacy for collective bargaining rights continues. We call on Congress to pass the PRO Act and urge the NLRB to reform federal labor law and ensure drivers have the right to bargain.

MYTH #6: The bill enshrines standards into law that take away driver rights

In California, Uber and Lyft took away drivers rights by spending over $200 on Prop 22. The companies have invested millions more in initiative committees to take that same playbook on the road to other states.

The Expand Fairness Bill would expand drivers rights, avoid an expensive ballot initiative fight to take away the nation-leading standards drivers have won, and delivers on drivers’ top demands:

A message for out-of-state critics

Drivers in Washington state have been organizing for a decade and winning the nation’s highest labor standards.

Before out-of-state critics attack our fight for nation-leading labor standards, we call on you to listen to local drivers about our demands, rather than telling us what they should be.