O'Brien Proposal Would Give Uber Drivers a Voice - Drivers Union

O'Brien Proposal Would Give Uber Drivers a Voice 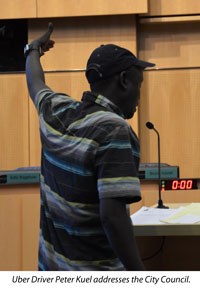 You know something is afoul in Seattle’s for-hire industry when a driver for a $50 billion company like Uber looks at his tax return and discovers that he made less than $3/hr last year.

But that is the reality workers like Takele Gobena are facing in the new "gig economy" as they try to cobble together a living without access to basic rights and protections of traditional employees.

Because they are classified as independent contractors, for-hire drivers don't have the ability to unionize through a traditional NLRB election process, and they aren't covered by Seattle's wage theft, sick leave, or new $15/hr minimum wage law.

Fortunately, for drivers in Seattle's for-hire industry, some relief may be on the way.

Under a proposal put forth last week by City Councilmember Mike O'Brien, taxi, for-hire, and drivers for transportation network companies like Uber and Lyft, would have the ability to join together to bargain collectively over their wages and working conditions.

This is groundbreaking, innovative policy that would give drivers a voice and a formalized process for addressing their concerns.

"I think this collective bargaining that you're proposing is a great step to equalizing things..." - Don Creery

"I think this collective bargaining that you're proposing is a great step to equalizing things, getting us on parity, and making these middle class jobs," said Don Creery, as he addressed councilmembers at a committee hearing yesterday to discuss the issue at city hall.

Creery is an Uber driver and a member of the leadership council of the newly-formed App-Based Drivers Association. The association works closely with Teamsters Local 117 to ensure that drivers in the industry are treated fairly.

The association successfully reversed Uber's attempt earlier this year to cut the drivers' rate of pay by 15%. The group has also been active in lobbying for drivers' rights in Olympia.

But access to collective bargaining rights could be a game changer - not just for for-hire drivers in Seattle, but for independent contractors across the country.

It would allow the growing number of workers who are being exploited by unscrupulous employers in the new economy to achieve safe and secure working conditions and to earn a living wage.