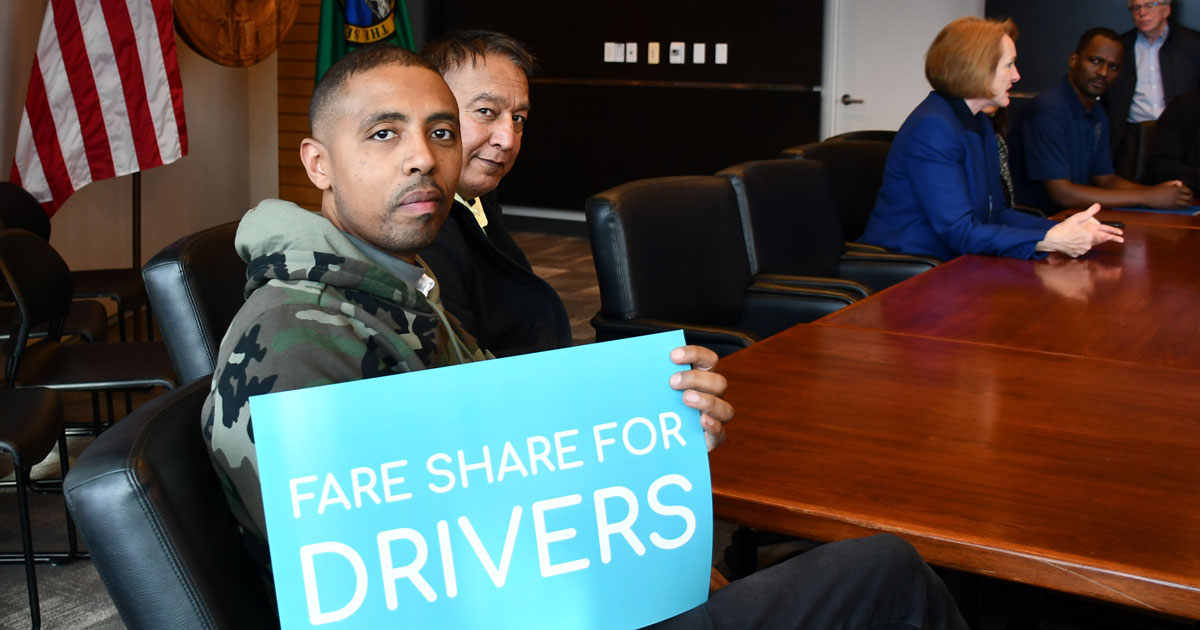 Today, Uber and Lyft drivers with the Drivers Union delivered a petition signed by over 1,600 drivers calling for fair pay.

The petition, which was delivered at a Seattle City Council hearing on Mayor Durkan’s “Fare Share” Plan, urged councilmembers to build on the Mayor’s plan with provisions to ensure greater transparency for riders and a living wage for drivers.

“My pay has been cut every year since I started driving, while the cost of living keeps going up,” said Don Creery an Uber and Lyft driver since 2013 and a Drivers Union leader. “City Council can take a major step towards fairness with modest improvements to the Mayor’s plan that implement transparency and living wage protections benefiting both riders and drivers.”

Drivers Union has led the campaign to put fair pay for Uber and Lyft drivers on the agenda at City Hall – surrounding City Hall with a driver caravan, organizing multiple drivers actions, and documenting Uber and Lyft taking more from riders, while paying drivers less.

“The need for Fair Pay for Uber and Lyft drivers has never been more urgent than now – in the midst of the dual crises of a global pandemic and a public reckoning with the reality of systemic racial inequity,” said Nurayne Fofana, an Uber and Lyft driver and Drivers Union leader.

“Before COVID, the driver community – made up largely of Black and brown immigrants – already earned less than minimum wage after expenses. Now, drivers face additional risks while spending extra uncompensated time and expenses to clean vehicles and ensure the safety of passengers and their families.”

The Fare Share plan has been backed by a coalition of over 60 housing, transit, labor, environmental, health, and social justice groups that came together to make sure Seattle’s growth works for everyone.

“I am humbled by the tenacity of driver activists who have led a multi-year campaign to push back against pay cuts from Uber and Lyft and put Fair Pay on the agenda at City Hall,” said John Scearcy, Secretary-Treasurer of Teamsters Local 117. “The resilience of these workers – building unity and solidarity amongst a diverse workforce that has been excluded from the protections of traditional labor laws – shows the best of the labor movement.”

The Fair Pay Standard – which would complete the Mayor’s Fare Share plan – is built off of over a year of stakeholder outreach, surveys and townhalls which engaged thousands of drivers, and recommendations from a city-commissioned independent study that found that Uber/Lyft drivers in Seattle often earn less than minimum wage after expenses.

Uber and Lyft have sought to avoid pay regulation, most recently by financing a competing study which has been widely criticized in the academic community for methodological flaws and bias.